I really, really love these series. Not only the TV series but also the books. I think it’s a big hit ( here in Greece it is not shown on the TV so I can’t really tell but many of my friends have watched the series. ). My favorite characters till now are Daenerys, Tyrion and Arya, Which are yours?

I therefore believe I do not have to explain the reason why I make a Game of thrones outfit inspiration my first blogpost after a long time… So, let’s begin! (Ah! In the end I have the links for the images and the clothes shown so that you can find them if you want them. 😉 )

First outfit inspired by the clothes worn by the people in Vaes Dothrak. I really liked the leather details in their clothes as well as their boots. The color scheme is quite simple to follow as they almost all the time chose brown-ish colors.

The second is one of the most badass characters in the series, Arya Stark. She almost all the time wears boyish clothes, unlike her sister, and on the first cycle has her hair braided but on the second cysle has a short boy haircut. Her color scheme is mostly grey, brown with hints of white and black.

Here is an outfit inspired by Lady Catelyn Stark, a character that I love but I can never forgive for not having at least a humanly approach to Jon Snow. Hello, he is your stepson wheter you like it or not and he didn’t choose to be your son’s bastard. Other than that I admire how she stays strong for the sake of her children. Her color scheme is also quite settle with blue-ish and grey tones in almost all her outfits.

Sansa Stark. Such a beautiful girl but there are so many times I want to shake her or punch her in her face. Why don’t you just leave with the Hound??? Why??? At the beginning of tha series she wears the Stark’s colors, grey and white but soon becomes the queen’s clone and wears the colors worn in the court. Her hair have some amazing updos I cannot seem to understand, even after watching the series so many times, how they are made. 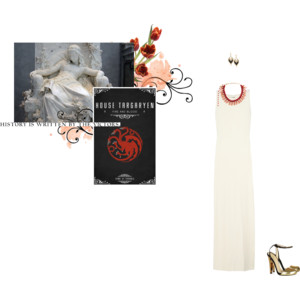 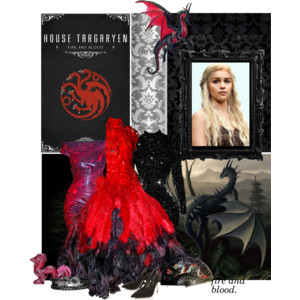 Outfits inspired by the house Targaryen. Fire and blood is their motto and their color scheme is, without any doubt, red. Although Daenerys almost never wears this color, should she come back to rule the Seven Kingdoms, I don’t think she would not wear a lot of clothes with this color on them. Of course I have included an outfit inspired by the one she wears at her wedding ceremony but put up in a more wearable manner. 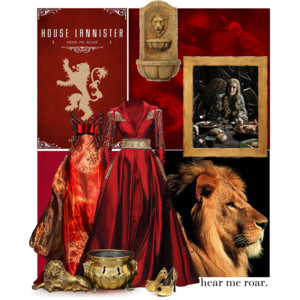 House Lannister. 3 children, two of them making incest actions and one dwarf. Nice. Their motto is hear me roar and they surely do as they are the richest and from my point of view, one of the most vicious houses. Their colors are, also red and even though Cersei is one of my least favorite characters, I adore her clothes…

My laptop was kinda grumpy today, so I will upload the rest of the post later… If you wish to see the clothes used in the pictures, some of them are found here , just click on the picture and it will give you the links to the shops selling them. And you can find much more here just click on the collections that caught your eye. 😉

So, till next time, I wish you a great time!!